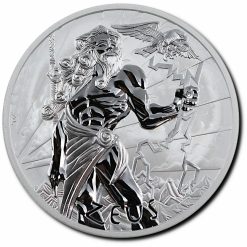 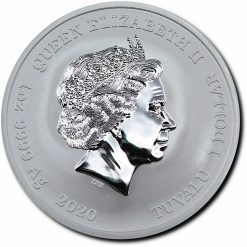 In 2014, The Perth Mint released its first ever antiqued coins in the Gods of Olympus series. The coins were incredibly popular and immediate sell-outs. To pay homage to a product that popularised the antiqued finish, the iconic Zeus design is back in 2020 and for the first time ever in a dual release format by The Perth Mint will be available in both bullion and antiqued finish.

THE FATHER OF GODS AND MEN

In ancient Greek mythology, Zeus was worshipped as the supreme ruler of Mount Olympus and the Pantheon of gods that lived there. He was the god of the sky and weather, law, justice, morals and fate, and the spiritual leader of both gods and men. Zeus seized control from the Titans and divided the universe between his siblings. Zeus took control of the heavens, Poseidon the sea, and Hades the underworld.

The coin’s reverse depicts a bearded Zeus rising up into a stormy sky wielding his thunderbolt and sceptre with an eagle flying above his shoulder. The design includes the inscription ZEUS and The Perth Mint’s ‘P’ mintmark.

The Jody Clark effigy of Her Majesty Queen Elizabeth II, the 2020 year-date, the weight and purity, and the monetary denomination are shown on the coin’s obverse.