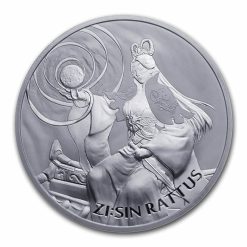 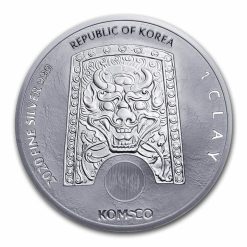 ZI:SIN are the Twelve Guardians assigned to protect twelve directions. They serve as protection to the world against evil forces from twelve directions at all times. Rattus has the ability to predict danger.

The reverse features a depiction of the guardian Rattus dressed in a celestial robe under a moon.

The obverse depicts Do ggae bi in extravagant detail, a mythical figure from Korean lore that was believed to have the power to protect from evil spirits.

Inscriptions include “REPUBLIC OF KOREA” encircling the top rim, and “2020 FINE SILVER 999” at the left rim, with “1 CLAY” at the right. Below the image is a unique, latent image engraving, that very faintly displays, “999” in a small circle. “KOMSCO” is inscribed at the bottom rim.

The “1 Clay” is a new measurement developed by KOMSCO. It references 1 unit of 1 troy oz of the metal. The word clay is considered to be of the soil, out of which the metal was derived.