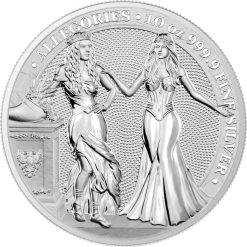 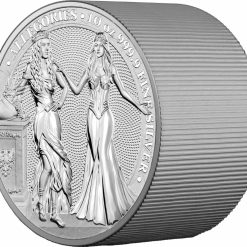 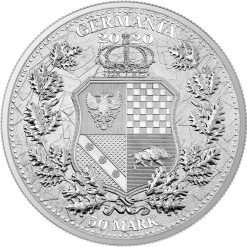 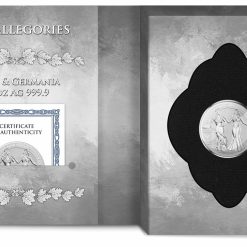 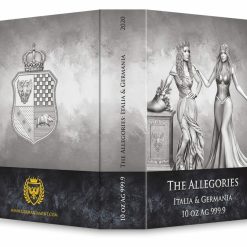 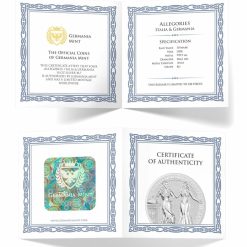 OBVERSE
The personification of Italy is depicted as a young woman with long, curly hair and a pleated dress highlighting her femininity. A crown with mural-like towers resting on her head, represents an emblem of tutelary deities who watch over a city. The Horn of Plenty by her side symbolizes prosperity and wealth. Like previous Allegories designs, Lady Italia is accompanied by Germania Mint’s well known personification of Germania. The two women are standing close to each other with Germania’s hand on Italia’s shoulder – a symbol of friendship between cultures.

REVERSE
The image on the reverse is the coat of arms representing moral principles and noble values. Germania was a historical land and has never been an official country, that is why Germania Mint decided to create their own interpretation of its coat of arms. Its symbols and design are a creation of Germania Mint’s imagination, however it has been created in accordance with applicable heraldry rules.

Presentation
Each coin is presented in a protective capsule inside of a blister pack alongside a certificate of authenticity.