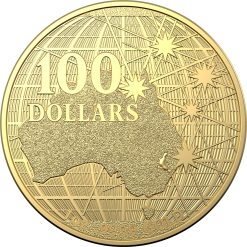 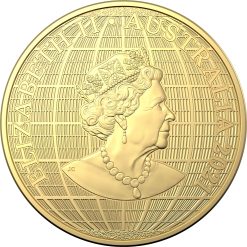 The Royal Australian Mint is proud to present the 2021 $100 1oz Gold Investment Coin as the latest release in the Beneath the Southern Skies series. Quintessentially Australian, the design pays homage to Stuart Devlin, who designed Australia’s first decimal coinage, and features a platypus in Sydney’s position on a map of Australia.

HISTORY & SIGNIFICANCE
The Beneath the Southern Skies series is symbolic of Australia’s foray into decimal coinage in 1966. The series comprises of precious gold and silver investment coins featuring a simple yet striking design. Following the series’ first release in 2020, the 2021 $100 1oz Gold Investment Coin and 2021 $1 1oz Silver Investment Coin design is quintessentially Australian and includes a map of Australia and the Southern Cross, inspired by one of Stuart Devlin’s original sketches. The coins also feature New South Wales’ animal emblem, the platypus, in place of Sydney.

Devlin, commonly regarded as the father of Australia’s modern currency, designed Australia’s first decimal coinage and these coins reimagine one of Devlin’s original sketches more than 50 years ago. The gold and silver investment pieces also pay tribute to the Royal Australian Mint’s award-winning Southern and Northern Sky series, while the silver coin is the first and only 99.99% pure silver coin produced by the Mint. Part of an ongoing series, these coins will be coveted by domestic and international collectors alike.

Images are for illustration purposes only.
Bullion coins supplied may vary in finish, including colour tone, tarnishing, scratches and copper spotting. Image quality may also vary when viewed on different desktop and mobile devices.