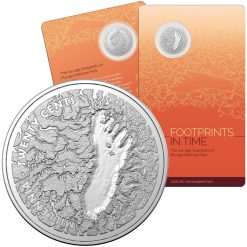 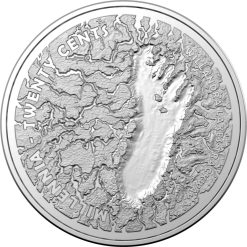 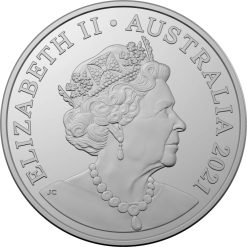 The Mungo footprints, in the Willandra Lakes Region World Heritage Area, are the oldest preserved footprints ever found in Australia and the largest set of ice age footprints in the world. The Royal Australian Mint celebrates these precious glimpses into our past with this striking design available as both a 2021 $1 Fine Silver Proof Coin and 2021 20c Uncirculated Coin.

Twenty thousand years ago a family group walked across the soft claypan of an ancient drying lake bed. A few days later a number of hunters ran across the area chasing game. Finally, and most remarkably, an individual “hopped” across the claypan leaving a single line of right footprints. These three journeys or stories have been captured forever in the petrified clay of the Willandra Lakes Region World Heritage Area, and are known as the Mungo footprints.

The footprints were discovered in 2003 when the shifting sand dunes revealed the petrified indentations to archaeologists undertaking a survey of the area. Further digging and research revealed one of the most intriguing and intact insights into how people lived, travelled, hunted and survived in the Pleistocene era during the last ice age. In 2006 the tracks were covered again by sand to protect them from the elements. Only a handful of people know the exact location of these wondrous footprints in time.