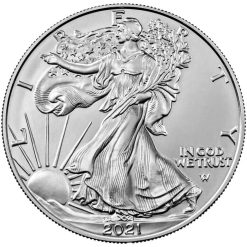 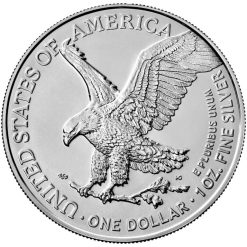 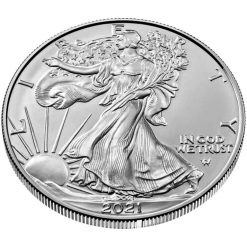 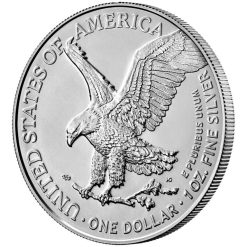 The American Silver Eagle is the official silver bullion coin of the United States.

The American Silver Eagle has been produced at three mints: the Philadelphia Mint, the San Francisco Mint, and the West Point Mint.

The design on the coin’s obverse was taken from the “Walking Liberty” design by Adolph A. Weinman, which originally had been used on the Walking Liberty Half Dollar coin of the United States from 1916 to 1947. The obverse is inscribed with the year of minting or issuance, the word “LIBERTY”, and the phrase “IN GOD WE TRUST”. The design also adds the artists initials underneath the “IN GOD WE TRUST” inscription.

As of 2021, the reverse shows an eagle coming in for a landing, carrying an oak branch as if to add it to a nest. To give the new coins an added level of security, they have also been updated with enhanced security features, including a reeded edge variation. The reverse is inscribed with the phrases “UNITED STATES OF AMERICA”, “1 OZ. FINE SILVER”, “ONE DOLLAR” and “E PLURIBUS UNUM” to the right of the eagle.

The United States Mint is a bureau of the Department of the Treasury responsible for producing coinage for the United States to conduct its trade and commerce, as well as controlling the movement of bullion. The first United States Mint was created in Philadelphia in 1792, and soon joined by other centers, whose coins were identified by their own mint marks. There are currently four active coin-producing mints: Philadelphia, Denver, San Francisco, and West Point. Click on Type 1 American Silver Eagle if you wish to view the 2021 American Silver Eagle Type 1. We carry a large selection of both bullion and numismatic coins from The US Mint. View our entire range of US Mint products.