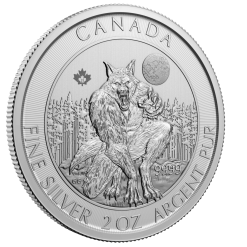 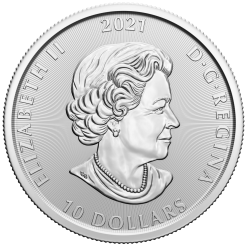 Introducing the second coin of the Creatures of the North series – the Werewolf!

Beware the full moon! Tales of strange creatures in the night have always haunted our imaginations, and in the province of Quebec, the loup-garou is one of the most famous legends of all.

Werewolf sightings may date back to the age of New France, but in July 1767, an article in the Gazette de Québec cautioned the public to be on the look-out for a loup-garou in the guise of a beggar.

Either the creature or its legend was brought to these shores by settlers from France, where, several decades before, a werewolf “epidemic” had resulted in witch trials and executions. A few years prior to Quebec’s famous loup-garou sighting, hundreds of deaths in southern France were attributed to the Beast of Gévaudan, prompting King Louis XV to place a bounty on the werewolf’s head.

Is this shape-shifting creature cursed? The story changes depending on the raconteur. But the loup-garou isn’t limited to the province of Quebec: Acadians brought the legend with them when they re-settled in Louisiana, where the Rougarou is said to prowl the bayous and frighten misbehaving kids.

The reverse features Gerald Gloade’s depiction of a werewolf, crouched down menacingly grabbing forward with this left hand. The werewolf is depicted in front a forest with the full moon shining down. The inscriptions “CANADA”, “FINE SILVER 2OZ ARGENT PUR” can be seen around the edge with “9999” underneath werewolf’s leg. The coin’s reverse also includes two cutting-edge security features: precise radial lines and a micro-engraved lasered maple leaf with the numeral “21” (visible under magnification) to denote the coins year of issue.

The obverse of each coin bears the Susanna Blunt effigy of Her Majesty Queen Elizabeth II. Also included are the inscriptions: “ELIZABETH II”, “D.G.REGINA”, as well as the 2021 year-date and monetary denomination. The background incorporates the radial line security feature.

Each bullion coin comes in a Swan Bullion stylised plastic flip. Capsules can be purchased as an optional extra.

The Werewolf 2oz silver bullion coin come in tubes of 14 with 20 tubes to a monster box (560oz total).

ABOUT THE ROYAL CANADIAN MINT

The Royal Canadian Mint is the mint of Canada and a Crown corporation, operating under the Royal Canadian Mint Act. The Mint produces all of Canada’s circulation coins, and manufactures circulation coins on behalf of other nations. The Mint also designs and manufactures precious and base metal collector coins; gold, silver, palladium, and platinum bullion coins; medals, as well as medallions and tokens. It further offers gold and silver refinery and assay services.