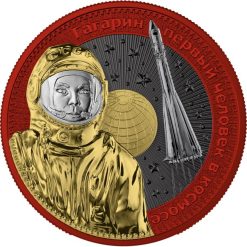 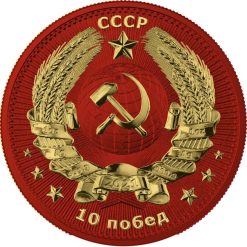 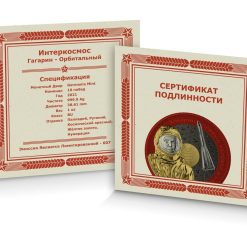 Yuri Gagarin flew only one cosmic mission, but in 1961 he made history as the first man in space. The 60th anniversary of this historic event is celebrated with the Gagarin 1 oz Silver coloured commemorative round. Struck by Germania Mint for the Red Star project, it is the first one from the new Interkosmos series, presenting the achievements and symbols of the Soviet space program.

DESIGN
The obverse of the first medal of the series depicts Yuri Gagarin and the Vostok 1 rocket, with which he reached orbit, the planet Earth in the background and the inscription “Gagarin – the first man in space”.

A thematic red, yellow and black plating has been applied to both sides of the coin.

PRESENTATION
Each coin is presented in a capsule in a box accompanied by a numbered certificate of authenticity.