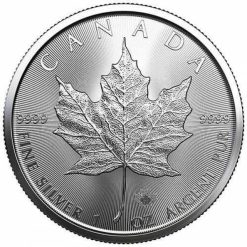 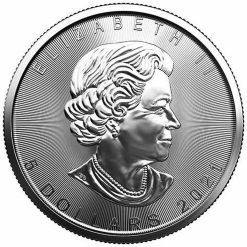 First issued in 1988, the Royal Canadian Mint’s iconic Silver Maple Leaf is one of the most beautiful and popular bullion coins in the world. Each Maple Leaf is minted with 1 troy oz of .9999 pure silver and bears a $5 face value backed by the Canadian government. Canadian Silver Maples also feature breakthrough security features such as precision radial lines, advanced engraving, and the Royal Canadian Mint’s proprietary BULLION DNA anti-counterfeiting technology.

Designed by Susana Blunt in 2005, the obverse of the 2021 Canadian Silver Maple leaf features the right-profile image of Queen Elizabeth II. The Queen’s name, the year of issue, and the coin’s $5 face value encircle her image.

The reverse features the signature maple leaf of Canada. Below the large leaf, you’ll notice a small maple leaf engraved with the coin’s year of issue. The RCM added this laser-engraved mark to the coin in 2014 as an anti-counterfeiting security measure. “CANADA,” “FINE SILVER 1 OZ ARGENT PUR,” and “9999” are also inscribed on the reverse.

Individual coins are presented in a Swan Bullion stylised plastic flip. Multiples of 25 are packaged into Maple Leaf tubes with 20 tubes to a monster box (500oz to a monster box).

ABOUT THE ROYAL CANADIAN MINT