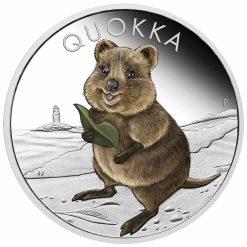 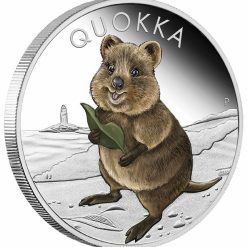 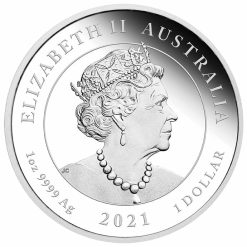 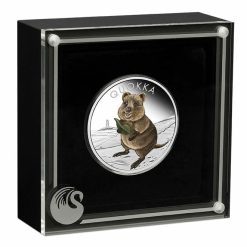 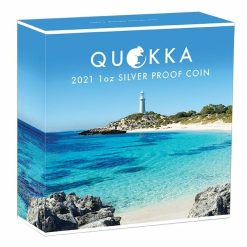 A quokka is a small type of wallaby found mainly in the south west region of Western Australia, particularly Rottnest Island, an idyllic location 18 kilometres off the coast near Perth. About the size of a cat, the quokka has thick, grey-brown fur, a broad face, shiny black eyes and round furry ears.

Thanks to its cute, smiley appearance and an acceptance of humans, the quokka has become a popular subject for ‘selfies’ in the age of social media.

Each coin is struck by The Perth Mint from 1oz of 99.99% pure silver and issued as legal tender under the Australian Currency Act 1965.

The Perth Mint will release no more than 5,000 of the Quokka 2021 1oz Silver Proof Coloured Coin.

The coin’s reverse portrays a coloured quokka on a beach with a lighthouse in the background. Standing on its hind legs, the herbivorous marsupial is eating its preferred diet of leaves. The design includes the inscription QUOKKA and The Perth Mint’s ‘P’ mintmark.

The obverse of the coin depicts the Jody Clark effigy of Her Majesty Queen Elizabeth II, the weight and fineness, the monetary denomination and the 2021 year-date.

The coin is housed in a classic display case with a clear lid. Packaged with an illustrated shipper, each coin is accompanied by a numbered Certificate of Authenticity.