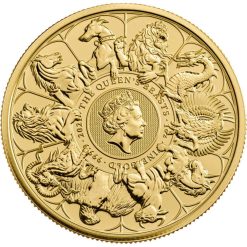 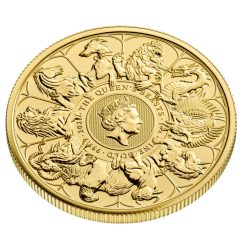 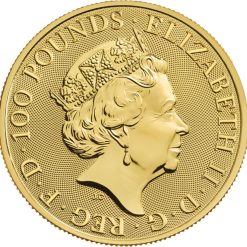 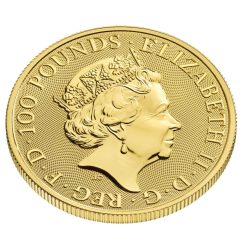 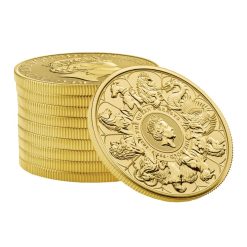 This coin produced by The Royal Mint marks the eleventh and final coin in the highly popular Queen’s Beasts Collection. It is the only coin to feature all ten of The Queen’s Beasts in one unique design.

Statues of ten heraldic beasts stood guard at the entrance to Westminster Abbey as the world watched the coronation of Her Majesty The Queen in 1953. Those creatures have been reimagined on the coins in The Queen’s Beasts Collection, which tell the stories of ancient symbols of ancestry and power through a series of designs by Jody Clark.

The reverse of the coin features all ten beasts united in a protective circle around Her Majesty Queen Elizabeth II, making it the only coin to feature the beasts and the monarch they represent in one regal design. The reverse also has the text “2021 THE QUEEN’S BEASTS . 1oz . FINE GOLD . 999.9” circling the effigy of Her Majesty Queen Elizabeth II.

The obverse features the effigy of Her Majesty Queen Elizabeth II, designed by Jody Clark, with the inscriptions “D . G . REG . F . D . 100 POUNDS . ELIZABETH II” around the edge of coin. There is a chain mail background texture adorning the obverse.

Individual coins are provided in an Air-Tite protective capsule. There are 10 coins to a tube.