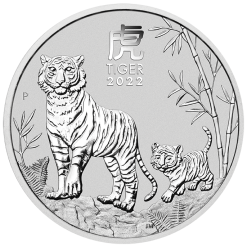 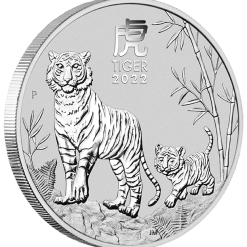 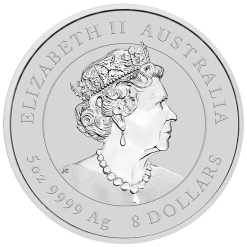 These magnificent silver coins celebrate the Year of the Tiger, the third of twelve animals associated with the ancient Chinese lunar calendar.

No mintage limit applies to the 1 kilo, 5oz, 2oz and 1/2oz coins. Except for the 1 kilo release, production of these coins will close at the end of 2022 when The Perth Mint will declare each coin’s official mintage.

A maximum of 100 10 kilo coins will be produced on a mint-to-order basis. Similarly, production will close at the end of 2022, when the coin’s mintage will be declared.

Each coin’s reverse portrays a tiger cub following its proud and protective parent across a rocky terrain featuring ferns and bamboo. Included in the design is the Chinese character for ‘tiger’, the inscription ‘TIGER 2022’ and the Perth Mint’s ‘P’ mintmark.