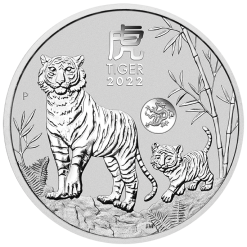 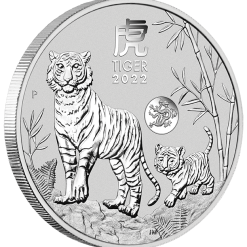 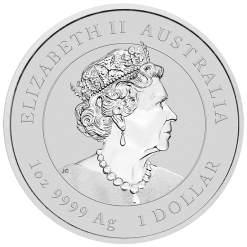 This magnificent silver coin celebrates the Year of the Tiger, the third of twelve animals associated with the ancient Chinese lunar calendar.

The 2022 Year of the Tiger with Dragon Privy Mark 1oz Silver Bullion Coin is struck by The Perth Mint from 99.99% pure silver and issued as legal tender under the Australian Currency Act 1965.

This coin has a limited worldwide mintage of 30,000.

This product is a retail exclusive to Swan Bullion Company in Australia.

The coin’s reverse portrays a tiger cub following its proud and protective parent across a rocky terrain featuring ferns and bamboo. Also included in the design is a dragon privy mark, the Chinese character for ‘tiger’, the inscription ‘TIGER 2022’ and the Perth Mint’s ‘P’ mintmark.

Each coin’s reverse includes a security feature in the form of a micro-laser engraved letter within the design. It is only detectable under a magnifying glass.

Each bullion coin is presented in a protective acrylic capsule. Multiples of 20 come in a roll and there are 100oz to a box. There are 300oz (3 boxes) to a “monster box” of these coins.