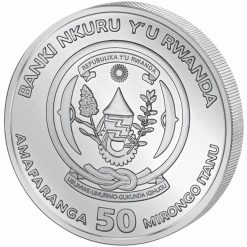 Originating in 2008 with the Mountain Gorilla, the African Ounce series is now in its 16th year and features the Nile crocodile.

Nile crocodiles have thick, scaly, heavily armoured skin and are considered to be one of the most dangerous crocodile species.

The reverse features the continent of Africa to the top the right. The bottom left has the depiction of a Nile crocodile and its young hatchling in the water. The coins weight, fineness and 2023 year-date also appears on the reverse.

The obverse of each coin features the Coat of Arms of Rwanda as well as the coins monetary denomination.

Each 2023 Nile Crocodile 1oz silver bullion coin is provided in individual plastic wrapping. Multiples of 10 are provided in sheets.