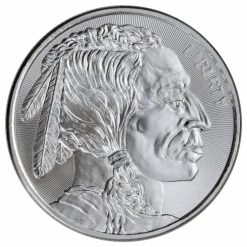 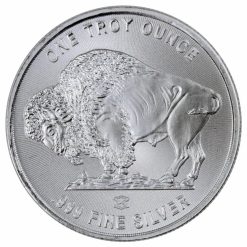 This innovative coin features a classic design from American coinage on a sunburst pattern of micro-engraved ridges. These radial ridges, or lines, are a security feature ensuring the source and purity of each silver round.

The obverse features the profile of a Native American, which appeared first on the Indian Head nickel. James Earle Fraser received a commision and charge from the US Mint to design a coin that captured the beauty and dignity of the American West. To that end, Fraser sculpted the profile of a Native American, which is a composite of three chiefs from different tribes: Two Moons of the Cheyenne, Big Tree of the Kiowa, and Iron Tall of the Lakota Sioux. “LIBERTY” is inscribed above the face of the Native American Chief.

The reverse features a depiction of Black Diamond, a 1550 pound American bison, and resident of the Central Park Zoo. “ONE TROY OUNCE,” “.999 FINE SILVER,” and the Elemetal Logo are inscribed on the reverse.