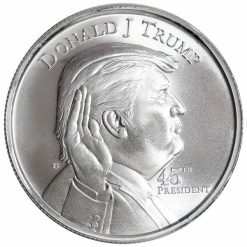 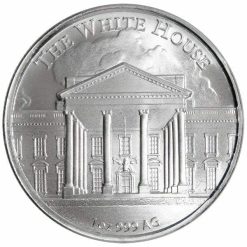 Donald Trump is shown on the obverse of this 1 oz silver round. He faces to the right with his hand raised as he is sworn in during his inauguration. Arcing over his head is the inscription “DONALD J TRUMP,” while “45th PRESIDENT” appears under his chin, and the Elemetal logo behind his head.

The reverse of this issue depicts an image of the White House, Trump’s new residency as President of the United States. Like the obverse, it is a detailed design. The inscription “THE WHITE HOUSE” appears above the design, while “1 oz 999 AG” appears below it.