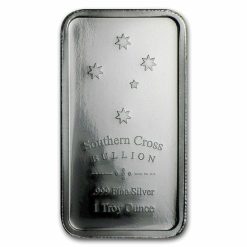 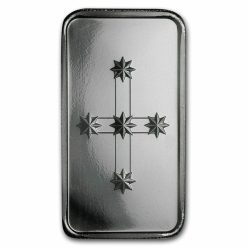 New from Southern Cross Bullion, these stunning silver bars feature the iconic Crux constellation on one side, with the other depicting the famous Eureka flag which first flew during the Battle of the Eureka Stockade in 1854.

Arguments over gold mining rights and licensing taxes in Ballarat, Victoria during the gold rush escalated in the years prior to the battle, with zealous and sometimes brutal enforcement of the gold tax regime culminating in the construction of rudimentary battlements on Bakery Hill and the miners’ threat of open rebellion against the government.

We swear by the Southern Cross to stand truly by each other and fight to defend our rights and liberties.

In the early hours of Sunday, 3rd December 1854 police and soldiers marched on the stockade and a battle with the miners ensued. The fight was quick and the government forces were brutal in their attack. At least 27 people were killed, most from the miners’ side.

Public reaction to the government’s excessive use of force was fierce, with thousands of people taking to the streets in Melbourne to condemn the authorities and, when thirteen of the miners put on trial for sedition and high treason were found ‘not guilty’, there was an outbreak of cheering from the public galleries.

The miners’ demands for fairer administration of the gold fields and better representation in government were ultimately met, with a Commission of Enquiry harsh in it’s criticism of the goverment’s actions prior to the fight at the stockade and the authorities’ response to it. The gold licences were abolished in favour of an annual miner’s right, Peter Lalor – one of the miners’ leaders (and one of those found ‘not guilty’ at the later trials) – was elected unopposed to the Victorian Legislative Assembly in 1856 and universal suffrage for while males was introduced in 1857.

Seen by many as the “birth of democracy in Australia” and acknowledged by all as one of the most important events in modern Australian history, the Battle of the Eureka Stockade and the Eureka Flag which flew over it are commemorated in this simple, elegant silver bar.