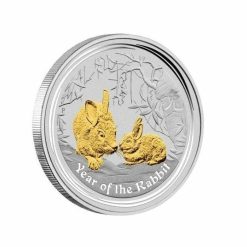 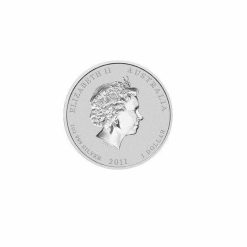 This year’s Gilded Edition from the Australian Lunar Silver Coin Series II depicts the rabbit, the fourth of the twelve animals associated with the ancient Chinese Lunar Calendar.

Specimen Quality 99.9% Pure Silver
The coin is meticulously struck by The Perth Mint from 1oz of 99.9% pure silver in specimen quality.

Stunning Gilded Design
The coin’s reverse depicts an adult rabbit and a young rabbit which have been selectively gilded in 24-carat gold. The rabbits are surrounded by foliage and a tree with creepers entwined in its branches. The Chinese character for ‘rabbit’ and the inscription ‘Year of the Rabbit’ also appear in the design with The Perth Mint’s traditional ‘P’ mintmark.

Limited Mintage
The Perth Mint will release no more than 50,000 of these 1oz Gilded Edition coins celebrating the 2011 Year of the Rabbit.

Presentation Packaging
The Year of the Rabbit Gilded Edition coin is housed in a red and black display case and an illustrated shipper.