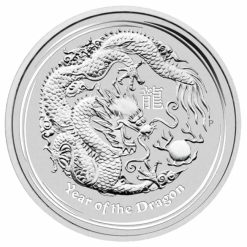 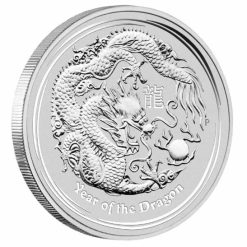 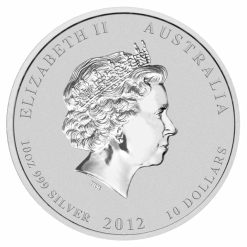 The Australian Lunar series of silver coins epitomises The Perth Mint’s rich tradition of minting investor coins portraying Chinese themes. This 2012 release commemorates the Year of the Dragon, one of 12 animals associated with the ancient Chinese lunar calendar.

The 2012 Silver Lunar Year of the Dragon coin features a traditional Chinese dragon, a “pearl of wisdom” and the Chinese character for “dragon.” The dragon is the most popular, and only mythical, creature of the Chinese lunar calendar.

Struck by The Perth Mint from 99.9% pure silver, each coin is issued as legal tender under the Australian Currency Act 1965.

The Perth Mint has declared a final mintage of 47,390 coins for the 2012 Year of the Dragon 10oz Silver Bullion Coin.

The reverse features a traditional Chinese dragon, a long, scaled, serpentine creature with four legs, a “pearl of wisdom” and the Chinese character for “dragon.”

The Ian Rank-Broadley effigy of Her Majesty Queen Elizabeth II, the monetary denomination, the weight and fineness, and the 2012 year-date are shown on the coin’s obverse.

The 2012 Year of the Dragon 10oz Silver Bullion Coin is presented in an acrylic capsule.