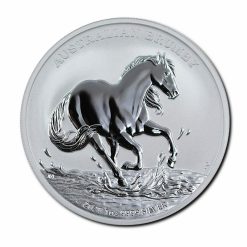 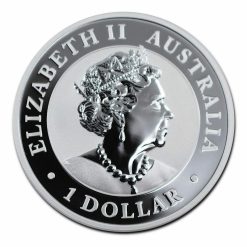 CELEBRATING AUSTRALIA’S WILD HORSE
According to tradition, when soldier and pastoralist James Brumby was transferred from Sydney to Van Diemen’s Land in 1801, he was forced to release a number of horses into the bush. Known as Brumby’s horses and later as ‘brumbies’, the word came to mean wild horses. Mobs of brumbies that roam the Australian Alps today are descended from lost, abandoned or escaped horses that in many cases belonged to colonial settlers like Brumby. Hardy, independent and having successfully inhabited a hostile environment, the brumby has become an icon seen by many as symbolic of the Australian national character.

This Australian Brumby coin is struck by The Perth Mint from 1oz of 99.99% pure silver. Issued as legal tender under the Australian Currency Act 1965, it bears the Jody Clark effigy of Her Majesty Queen Elizabeth II on the obverse.

AUTHENTICATION FEATURE
This coin includes an authentication feature on the reverse in the form of a micro-laser engraved letter. Detectable under a magnifying glass, it is designed to make it significantly more difficult for the coin to be counterfeited.

PRESENTATION
The Australian Brumby 2020 1oz Silver Bullion Coin is presented by The Perth Mint in a protective acrylic capsule.