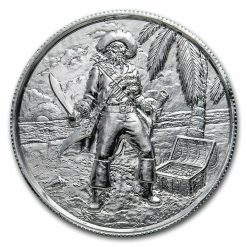 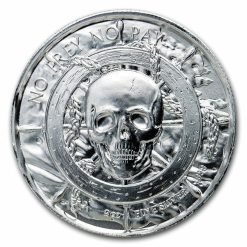 “The Captain,” known for his piracy on the open seas, is featured on the reverse of this 2oz ultra high relief silver round. Strapped with weapons across his chest and holding a sword and treasure map, The Captain stands beside a conch shell and a treasure chest filled to the brim with coins as the sea roars in the background. He wears a long coat, an eye patch, hat, and a long, gnarled beard.

Pirates like The Captain were known for capturing vessels on the open waters and robbing the ships of their valuable belongings. The reverse image displays the pirate as he proudly stands beside a hoard of gold, silver, and precious stones.

The common obverse of the Privateer series features a human skull atop a wooden wheel that’s wrapped in tattered rope. Reminiscent of the Jolly Roger, the design is surrounded by inscriptions of “NO PREY NO PAY” and “2 oz. FINE SILVER .999. “No prey, no pay” is a piratical phrase that meant if a raid was unsuccessful and no valuable commodities were acquired, the privateers would not be paid for their efforts.