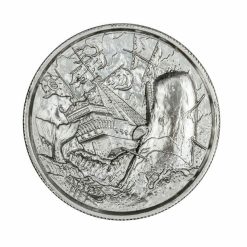 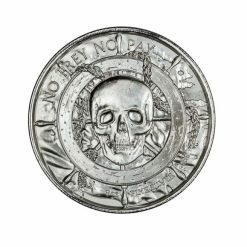 Use of the term white whale often refers to the encounter of Ahab and a massive whale in MOBY DICK. Ahab was so obsessed with catching the whale, that it eventually led to his death at the hands of the whale. In reality, the white whale is another common name for the beluga whale, a species of whale found in Arctic and sub-Arctic waters.

On the reverse of the 2 oz Elemetal White Whale Silver Round youll find the common design theme used on the reverse of all rounds in the collection. In this design youll notice a human skull set against a backdrop of a ships wheel. The pirate motto No Prey, No Pay is found above the design, with the rounds weight, metal content, and purity struck below.

The obverse of the 2 oz Elemetal White Whale Privateer Series Silver Round includes its own unique design. Youll notice the commonly used privateers ship rocking violently in the waves as a massive white whale crests the waters surface with harpoons sticking out from its body. Pay close attention, and youll notice the reverse design elements on the flag flying from the stern of the ship.