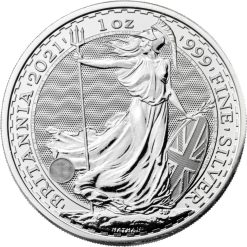 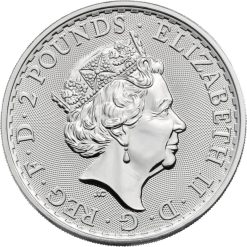 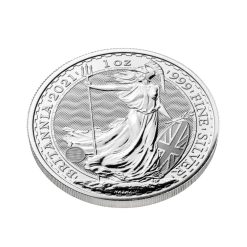 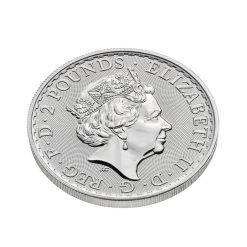 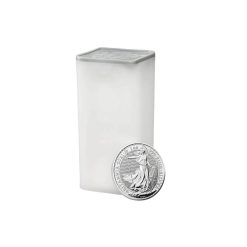 For more than 1,000 years The Royal Mint has innovated to create coins that are both beautiful and secure. In 2021, Britannia, the symbol of Britain, leads the way to redefine security in the bullion market, the embodiment of this drive for the very best in design and security.

This latest evolution of an icon takes Philip Nathan’s acclaimed interpretation of Britannia and adds four ground breaking security features to create the most visually secure coin in the world. These additions both decorate and protect the coin, just as the micro-text that borders the design states – DECUS ET TUTAMEN, or AN ORNAMENT AND A SAFEGUARD. In the lower left-hand of the design, below Britannia’s flowing gown, is a trident to represent her naval history. As the viewer changes their perspective this trident becomes a padlock, emphasising the coin’s secure nature.

Surface animation behind Britannia reflects the movement of waves, and fine details like the Union Flag on Britannia’s shield have been highlighted by tincture lines. Standing firm in the eye of the storm, she displays an unyielding resolve. Since it was chosen to adorn the very first Britannia bullion coin in 1987, it has been acclaimed as a modern masterpiece.

The reverse of the coin features the four new security features which include;

Latent feature
A latent feature switches between a trident and a padlock as the viewer changes their perspective, representing both Britannia and bullion security.

Tincture lines
Britannia’s union flag shield, a powerful symbol of Britain as a whole, is highlighted by the tincture lines.

Micro-text
Micro-text next to the coin’s banding reads ‘DECUS ET TUTAMEN’, which translates as ‘AN ORNAMENT AND A SAFEGUARD’.

Singular coins are presented in a Swan Bullion stylised plastic pouch. We offer an optional Air-Tite capsule to protect your investment. Multiples of 25 are packaged into tubes with 20 tubes to a monster box (500oz total to a monster box).