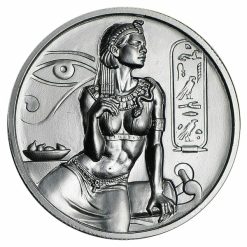 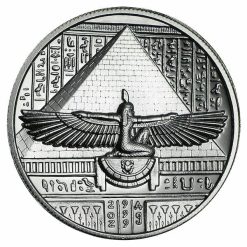 The first silver round released in the Egyptian Gods Series, the 2 oz Elemetal Egyptian God Series Cleopatra Silver Round features the last pharaoh of Egypt during the Ptolemaic era. The Ptolemies were of Greek descent and ruled Egypt from the death of Alexander the Great in the Hellenistic Period to the conquering of the region by the Roman Empire.

Cleopatra was said to possess great beauty, and though most Ptolemaic rulers in Egypt refused to learn and speak Egyptian (using Greek as the official language instead), Cleopatra adopted Egyptian customs for her own use. She told the people that she was the incarnation of the goddess Isis, who was known as the ideal mother and wife figure.

On the obverse face of each 2 oz Elemetal Egyptian God Series Cleopatra Silver Round you’ll find the primary design of Cleopatra as she sits on a lounging chaise. Surrounding her image are countless ancient Egyptian symbols, including the cartouche of Cleopatra bearing her lineage name, the Eye of Horus, and a bowl of figs. It is believed that her servants smuggled in an asp snake in a bowl of figs, which she allowed to bite her and inject its poison as an act of suicide.

The reverse face of these silver rounds bears the image of Isis, the goddess Cleopatra claimed to be the reincarnation of in Egyptian society. She is seated in the center of the design and surrounded by hieroglyphs that were taken directly from ancient Egyptian papyri, as well as text found on the Temple of Horus.

Images are for illustration purposes only.
Bullion products supplied may vary in finish, including colour tone, tarnishing and milk spotting. Image quality may also vary when viewed on different desktop and mobile devices.